Caroline County is a United States county located on the eastern part of the Commonwealth of Virginia. The northern boundary of the county borders on the Rappahannock River, notably at the historic town of Port Royal. The Caroline county seat is Bowling Green.

Caroline County was established in 1728 and was named in honor of Caroline of Ansbach, wife of the then reigning king, George II of Great Britain. It is the birthplace of the renowned racehorse Secretariat, winner of the 1973 Kentucky Derby, Preakness Stakes and Belmont Stakes; the Triple Crown.

As of the 2010 census, the county population was 28,545, having more than doubled in the last fifty years.[2] Caroline is part of the Greater Richmond Region. 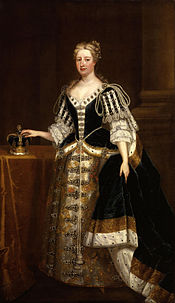 Portrait of Caroline of Ansbach, for whom the county was named

Caroline County was established in the British Colony of Virginia in 1727 from Essex, King and Queen, and King William counties. It was named for Caroline of Ansbach, the wife of King George II of Great Britain, who had recently taken the British throne at the time.[3]

During the Colonial Period, Caroline County was the birthplace of Thoroughbred horse racing in North America. Arabian horses were imported from England to provide the basis for American breeding stock.

Patriot Edmund Pendleton played a large role in the Virginia Resolution for Independence (1775). Caroline native John Penn was a signer of the Declaration of Independence,[4] albeit as a delegate from North Carolina.

Explorers William Clark and his slave York were members of the Lewis and Clark Expedition (1803–1805), and William’s older brother, General George Rogers Clark—conqueror of the old Northwest Territory and Revolutionary War hero. Both were born near what is now Ladysmith.

In 1847, after being a member of the first graduating class of Virginia Military Institute (VMI), William “Little Billy” Mahone (1826–1895) of Southampton County began teaching at Rappahannock Academy in Caroline County. He was to become prominent as a railroad builder and developer, Confederate General, leader of Virginia’s short-lived Readjuster Party, and a United States Senator.

On May 10, 1863, Confederate Lieutenant General Thomas “Stonewall” Jackson died of complications from pneumonia at the Chandler plantation in Guinea Station (also known as Guiney’s Station), in the unincorporated Caroline County community of Woodford. The Chandler residence is now known as the “Jackson Shrine.”[5]

During Union General Ulysses S. Grant‘s Overland Campaign, Confederate troops under General George E. Pickett fought Union troops near Milford. Just as the Civil War was concluding in April 1865, President Lincoln was assassinated in Washington, DC as part of a conspiracy to kill the leaders of the United States. As the conspirators fled, a manhunt was launched. After 10 days, in the wee hours of April 26, federal troops tracked down John Wilkes Booth, Lincoln’s assassin, and fellow conspirator David E. Herold at Garrett’s farm about 3 miles west of Port Royal. Booth was fatally shot during their capture by federal troops. Herold was returned to Washington, where he was executed by hanging with 3 co-conspirators on July 7, 1865.

At the southern edge of the county, The Meadow, a farm originally established in 1810, became a premier facility for breeding, raising and training Thoroughbred race horses. In 1972, Riva Ridge, raised at The Meadow, won the Kentucky Derby and the Belmont Stakes, two of the three events of the Triple Crown. The following year, Secretariat, born at The Meadow, won the famous Triple Crown for the Chenery family’s Meadow Stable.

In 2003, The State Fair of Virginia purchased Meadow Farm for development as a new site for the annual Virginia State Fair. Long held at locations in the capital of Richmond and Henrico County, the fair was increasingly squeezed out by expanding development around it and the growth of the event. Most recently, it was held at Strawberry Hill in central Henrico County, at the facility which became the Richmond International Raceway. Beginning in September 2009, the annual Virginia State Fair has been held at the new Meadow Event Park in Caroline County.[6] The annual Meadow Celtic Games and Festival (formerly Richmond Celtic Games and Festival) will also be held at the new facility.[7]

In 2009 the National Civic League presented Caroline County with one of ten annual All-America City Awards.[8]

Caroline County is bounded on the north by Spotsylvania and King George counties; on the south by Hanover County; on the east by King William, King and Queen, and Essex counties; and on the west by Spotsylvania County.

The county is also home to a quarry that has proved a rich source of pre-historic whale and shark skeletons. The whole county is located in what was in ancient times an ocean. It is known to palaentologists as the middle Miocene Calvert Formation of Virginia. A whale skeleton discovered there in 1990 was proved to be a new whale species (see Eobalaenoptera harrisoni).

Caroline County is served by Interstate 95, US 1 and US 301. These three routes are important for interregional travel.