Dinwiddie County is a county located in the Commonwealth of Virginia. As of the 2010 census, the population was 28,001.

Its county seat is Dinwiddie.[2] 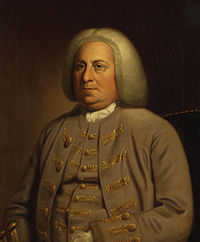 Portrait of Robert Dinwiddie; Dinwiddie County was named in his honor

The first inhabitants of the area were Paleo-Indians, prior to 8000 BC. They are believed to have been nomadic hunter-gatherers following animal migrations. Early stone tools have been discovered in various fields within the county. At the time of European contact, Native Americans had territory in the region.

Dinwiddie County was formed May 1, 1752, from Prince George County. The county is named for Robert Dinwiddie, Lieutenant Governor of Virginia, 1751–58. The county raised several militia units that would fight in the American Revolution.

During the Civil War the Battle of Lewis’s Farm was fought along Quaker Road [Rt. 660]. It took place on March 29, 1865. This was the first in several attempts by Union General Ulysses S. Grant to cut Robert E. Lee‘s final supply line—the Southside Railroad—in the spring of 1865. Here the Union forces led by Brig. Gen. Joshua L. Chamberlain engaged Confederates under Maj. Gen. Bushrod R. Johnson. After sharp fighting, the Union troops entrenched nearby along the Boydton Plank Road, and Johnson withdrew to his lines at White Oak Road. The Union army cut the rail line four days later, after capturing Five Forks on April 1, 1865, at the Battle of Five Forks. Several other engagements were fought in Dinwiddie County, including the Battle of Dinwiddie Court House, Battle of Sutherland’s Station, and Battle of White Oak Road.

In 2009 the Dinwiddie Republican party acting vice-chairman Jerry Dyson III ran against Petersburg Republican party chairman Susan McCammon for the Republican nomination for the 63rd district of the House of Delegates. This was the first time in decades a Republican from Dinwiddie ran for the 63rd nomination, challenging Democrat Rosalyn R. Dance for the first time since she was elected delegate in 2005. Jerry Dyson III later dropped out of the election in April leaving the nomination for Susan McCammon, who later dropped out in September leaving the Republican Party without a candidate.

The Bureau of Economic Analysis combines the independent cities of Petersburg and Colonial Heights with Dinwiddie County for statistical purposes.